Belarusian national cuisine.
Where to try in Minsk? 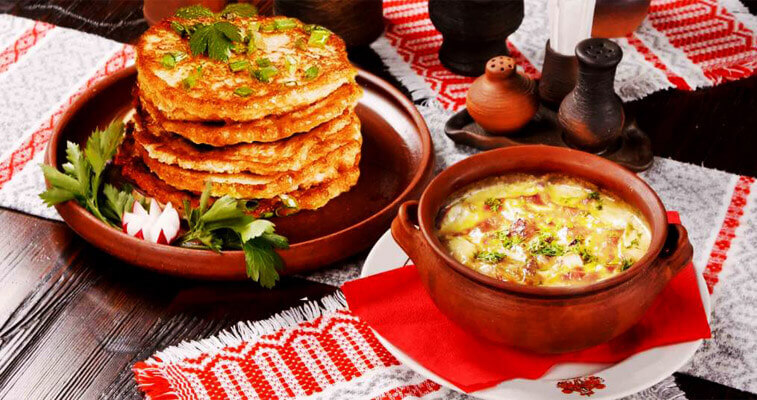 When visiting the Belarusian capital, guests often have a desire to try the real national Belarusian cuisine. We have compiled a list of the most deserving places (by our opinion) where you can try the best dishes of Belarusian cuisine. Such dishes include: draniki, kalduny, kliotski, potato’s babka, verasczaka, maczanka, haladnik. We also recommend that you try the excellent national alcoholic beverages: Belarusian sbiten and krambambulia. 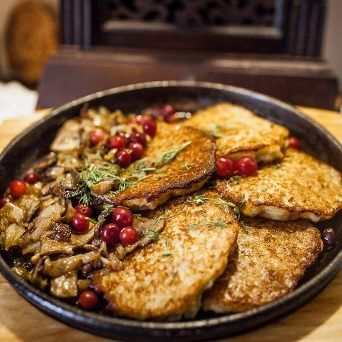 One of the best restaurants of Belarusian and Lithuanian cuisine in Minsk. The menu of the restaurant "Kuhmistr" is represented by delicious dishes, traditional for Belarus. Here you will enjoy home-made meat baked in pots or traditional potatoes pancakes “draniki”, cabbage rolls “golubtsy”, and delicious collations and vegetable snakes – everything that the real Belarusian cuisine is famous for. Cooks will take into account all the wishes of the customer and prepare author's dishes according to classical recipes, but in a modern way. 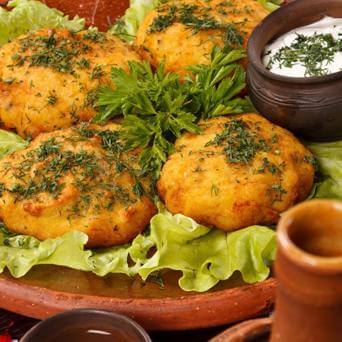 Restaurant "Kamyanitsa" can be safely called one of the most original places in Minsk. This restaurant has long become a favorite place for those who love the Middle Ages, folk culture and national Belarusian cuisine. One of the main halls of the restaurant is made in the authentic atmosphere of the Middle Ages: stone mills, stained glass windows, low ceilings, muffled light. The other is more like a tavern with dark rough wooden furniture and a fireplace in the corner of the hall. Moreover, "Kamyanitsa" has gone beyond the usual framework of the restaurant and for five years has been one of the organizers and participant of the folk festival of the same name. 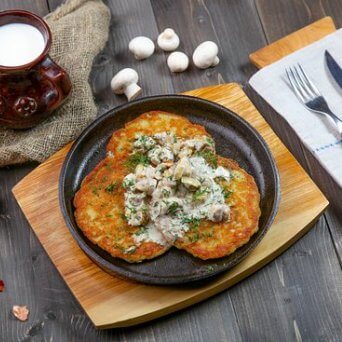 The cuisine in the restaurant "Vasilki" is predominantly Belarusian. Its menu offers a large variety of vegetable and meat salads, hot meat, fish and poultry dishes, soups and, of course, folk desserts. Particular attention in the "Vasilki" is given to dishes made of potatoes. Here you can try kalduny with meat or mushrooms, draniki with various fillings, kliotski boiled and fried, mchanka with pancakes. 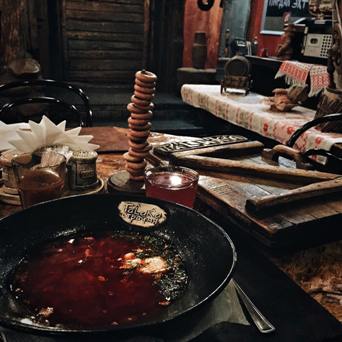 The interior of the restaurant has a unique truly Belorussian national color, only national dishes are served, and an atmosphere of exclusively Belarusian cordiality is created here. The menu of "Talaka" is based on the book "The History of the Belarusian Cuisine", which is a real historical document. The visit card of the restaurant is its domestically made kvass and cranberry juice, which is served here all year round.

In "Talaka" there is no place for semi-finished products. All products are exceptionally fresh and natural, such as lard, potatoes, cucumbers, and even herring made in a wooden cask. During the height of the hunting season, the menu is supplemented by 10 new game dishes. The real pride of the chef is venison with forest mushrooms and baked rabbit. 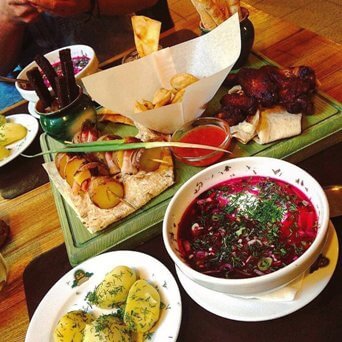 This is a restaurant-brewery, where 6 varieties of craft beer are made. Traditional dishes of the national cuisine, as well as European classic dishes are also served here. So, this place is valued by Belarusians by its delicious cuisine, and is attractive for tourists as well.

The main accent in the menu of "Rakausky Brovar" is dishes of Belarusian and European cuisines. There are traditional recipes for those who prefer classic dishes, and game dishes for those who wishing to try something special. During the warm season, the dishes may be cooked on an open fire. Foreigners, as well as Belarusians, like to order here pork brisket, and machanka with draniki. Craft beer served in the restaurant is always fresh. And the major pride is its unfiltered barley beer. 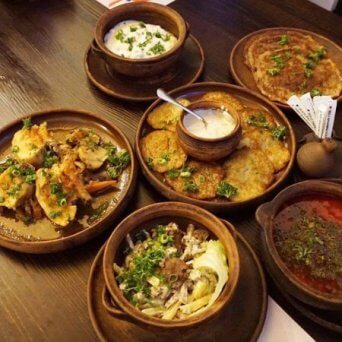 "Graj" is a cafe-club with national Belarusian cuisine, located in the heart of Minsk. This is a whole three floors, 7 rooms and three kitchens that represent gastronomic Belarus of different eras. Here you can try not only the traditional draniki and machanka, but also dishes of gentry: bigos, and beef peczisto.

However the most popular dish in the menu still draniki. Among them the most famous is branded "Drapnik Graj". You may also try the assortment of different types of lard and meats, "Charki and Shkvarki" - several kinds of branded liqueurs + snacks. Among beverages, a special attention should be paid to a collection of 12 types of Belarusian liqueurs made in accordance with old recipes, as well as beer made on their own brewery. 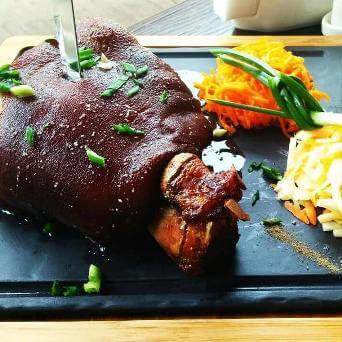 Real hospitality, sincere approach, and delicious cuisine! The interior has Belarusian national color, but with a modern design interpretation, where the most important thing is a comfort. Handmade painting on the walls and the decor of the chandeliers, the harmony of combination of natural wood and greenery, as well as other lovely details create a feeling of home coziness.

In the menu of the restaurant "Svoyi" you will find both well known and beloved dishes of the national cuisine, as well as the original chef variations of the Slavic cuisine: a zhur with smoked foods, a solianka with cowberries, a duck with fried cabbage and cracklings. Bar menu: milkshakes and smoothies made in accordance with own barman’s recipes, traditional and herbal teas, 5 types of homemade liquors. Desserts: poppy ice cream with season berries, aromatic apple cake, pumpkin pie with sunflower seeds and dried fruits.